Hysterectomy and the After Effects

Hysterectomy is the most common major procedure performed on women in the US. Even though many of the ‘female problems’  associated with a hysterectomy are medically trivial, one out of three women will have had 'surgical menopause' (hysterectomy that includes the removal of the ovaries) before the age of 60.

It is arguable that this high rate of hysterectomies is truly unnecessary. Many authorities agree that 90% of the procedures are elective, with less invasive alternatives available in at least 90% of these cases.

The medical profession continues to reassure women that the uterus is a disposable organ that they can quite happily live without.

A hysterectomy is performed on women between the ages of 20 to 50 for a multitude of reasons. Conditions include fibroids, endometriosis, prolapse, endometrial hyperplasia, pelvic inflammatory disorders, ovarian cysts, cancer and other menstrual dysfunctions.

Hysterectomy is, by definition, the removal of a vital female organ – the uterus and sometimes also the ovaries. The fallopian tubes and cervix are removed along with the uterus in a total hysterectomy. Two most common reasons for a hysterectomy

Fibroids are the primary reason why women in their 30s and 40s are recommended hysterectomies. Fibroids are benign, non-cancerous lumps that develop in the muscular walls of the uterus. They are composed of smooth muscle and connective tissue and are rarely solitary. Fibroids are never life-threatening; however, they can be uncomfortable and problematic. Fibroids are a product of oestrogen dominance. The female hormone oestrogen stimulates their growth, whereas a lack of oestrogen causes them to atrophy. Most fibroids shrink when oestrogen levels decline as a woman transitions to menopause.

Endometriosis is a condition in which tiny islets of the endometrium (inner lining of the uterus) become scattered in areas where they don't belong –  in the fallopian tubes, within the uterine musculature, on the outer surfaces of the uterus and other pelvic organs, the colon, bladder and sides of the pelvic cavity. While the definitive cause of endometriosis is unclear, there’s a lot of evidence that explains it as a result of xenoestrogens.

Xenoestrogens are toxic chemicals that mimic oestrogen in the body. They come from byproducts of the plastic and pesticide industries. Besides being a component of plastic, xenoestrogens are also found in makeup/cosmetic products, household cleaners, laundry detergents, and some birth control medications. They are also found in sunscreens, chlorine and processed food. Since oestrogen initiates endometrial cell proliferation and blood vessel accumulation in the endometrium, the aim of treatment is to block this monthly oestrogen stimulation of aberrant endometrial islets. Orthodox medicine uses progesterone to reduce the amount of tissue which travels retrograde. Oestrogen is increased, thereby reducing the amount of endometrial lining which is shed in menses. Symptoms of endometriosis include severe menstrual cramping, heavy bleeding, nausea and vomiting.

What can happen after a hysterectomy

Hysterectomy is major surgery, performed in a hospital under general anaesthesia. Typically, women are hospitalised for several days and recovery can take a year or longer. A hysterectomy is also known as 'surgical menopause' as it creates radical physiological and psychological changes. After surgery, many women spend years trying to find solutions in the hope of feeling normal again.

The after-effects of hysterectomy can be dramatic and this state of 'instant menopause' comes with its own list of consequences. Menopausal symptoms are experienced in a relatively short time and they can be quite severe. These include fatigue, insomnia, urinary problems, headaches, dizziness, vertigo, nervousness, irritability, anxiety, mood changes, heart palpitations, joint pain, weight gain, vaginal dryness, diminished physical strength, difficult or painful sexual intercourse, hair loss and a variety of skin problems.

There are also ‘post-hysterectomy syndrome’ issues to deal with such as depression, hot flushes, urinary problems and extreme postoperative fatigue. A woman may also experience feelings of grief from a sense of loss or mourning after the removal of this part of her body. Though nothing can bring back a uterus after being removed, it can be healing for any woman (even years after surgery) to spend a quiet moment, place her hand on the belly and thank the uterus for all it gave her.

The hormonal disruptions brought on by the surgery can also be far-reaching, affecting the nerve and hormone (endocrine) interactions responsible for the sense of emotional wellbeing. Hormone disruption affects the release of endorphins (serotonin, dopamine) to the brain, which is associated with feelings of calm. A change in oestrogen and progesterone levels also influence the relatively temperamental fluctuations of these ‘happy hormones’. This may explain why depression develops when the ovaries are removed or if they cease to function after menopause. This also affects the protective effect of oestrogen on the bones and cardiovascular system.

Just like any major procedure, a hysterectomy comes with associated risks. Many of the complications are related to the surgical operation itself. These include:

Should you or should you not?

Undoubtedly, there are valid and justified reasons for performing a hysterectomy. Many women who’ve been suffering from chronic, painful and sometimes extremely debilitating conditions have indeed benefited immensely from surgery. However, it is every woman’s right to understanding exactly the implications of hysterectomy and have an educated discussion concerning the importance of their sex hormones.

Removal of the ovaries via a hysterectomy leaves the body without not just oestrogen (an essential female hormone) but also other hormones such as progesterone, testosterone, and androstenedione. Women who had their ovaries removed report not feeling normal when only oestrogen in the form of patches or HRT is administered. This particular treatment approach doesn’t take into consideration the other synergistic hormones which make up the complete female hormone profile. Take note, however, that a hysterectomy which leaves the ovaries intact is not associated with an interruption in ovarian activity.

The Greeks invented the word hysterikos to explain ‘suffering caused by the uterus’ (hystera = womb), which was believed to include just about any physical or psychological malady imaginable. By the 17th century, Christianity had embraced the notion that whatever was 'wrong' with women – this encompassed even non-medical issues such as sinfulness, sexuality and emotionalism – were due to the reproductive organs they carried within them. Two centuries later, when modern medicine was in its unscientific infancy, physicians fixed on the uterus as a source of just about every problem a woman complained about.

The removal of both the uterus and ovaries would be more understandable if there were no alternatives available to address problems in the female reproductive system. Fortunately, however, there are. In fact, it's fantastic how often dietary, nutritional, herbal and emotional approaches can heal many of these problems where hysterectomy is initially recommended. Our advice is first explore natural solutions to see if these can avoid having a hysterectomy. In many cases you may be able to avoid the procedure. Our professional team are available to discuss the options available to you.

I have been using HH for a few months now and I am so happy with it and feeling so much better too.

I was having 30-40 hot flashes a day, suffering from night-time anxiety and always feeling flat.
Happy Hormones has reduced the hot flashes to 2-3 a day, sometimes none, I sleep well and I have more energy to get through the busy days. I take the powder form in water first thing every morning, virtually tasteless.
Can't recommend this product enough!

A
Happy Healthy You A.
A great product

I've been using this product on and off for more than 3 years. It's fantastic - has been a lifesaver as I work through the peri-menopausal phase. I've tried others, but they just aren't as effective. When combined with other lifestyle efforts (whole food diet, caffeine and alcohol reduction etc), it works wonders. Helps with fatigue too. Highly recommend!

I have been on happy hormones for a few years, thank heavens. I have recently started happy bladder at night and happy tumeric in morning, I add magnesium and cinnamon to the mix and body aches less, pees less at night and rests better = happy life 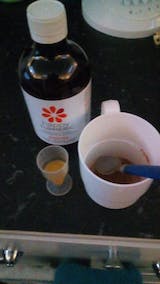 I have been on Happy Hormones over 4 years.
I love that Happy Hormones are all natural, with out any nasty chemicals.
I love how it balances me out,
Calms me down and clears my head making me less forgetful and able to think straight
Thankyou Jeff and the team for creating and producing such a wonderful product.